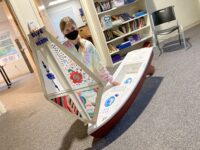 Aucocisco School is a nonprofit organization and a Maine state-approved Special Purpose Private School. Since 1994, we have offered a unique learning environment, specially designed for students who learn differently. With a lower, middle, and upper school, Aucocisco provides a safe space for students of all ages to recover their confidence and enjoyment of learning. Small classes, individual attention, and a strong focus on alternative learning styles make Aucocisco a place where students learn the skills and strategies they need to succeed.

Our school’s name, Aucocisco, comes from the Abenaki (an indigenous tribe in Maine) word meaning “resting place of herons.” We feel our students are like resting birds who rest and recover with us. Aucocisco students submitted names and voted to choose what our MiniBoat would be called, finally deciding upon Blue Heron.