The HIGH HOPES miniboat, which was launched off the Cape of Good Hope, circumnavigated the Indian Ocean after 815 days and traveling over 30,462 km. We’d like to thank our collaborators and supporters who made this possible: EP’s Founder Dick Baldwin, Bonnell Cove Foundation, Two Oceans Aquarium Foundation, and SEAMester Programme. 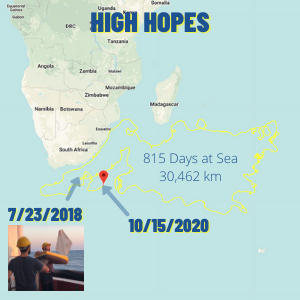