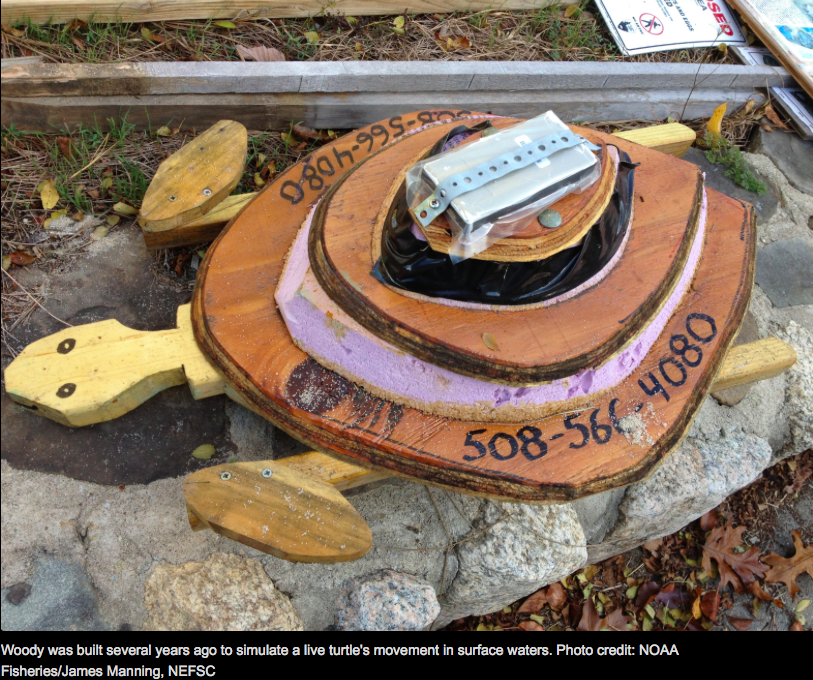 Full story can be found at http://www.nefsc.noaa.gov/press_release/pr2016/scispot/ss1616/

Using low-cost sensor technology in novel ways has become a hallmark of Jim Manning’s many research projects, whether they be ocean drifters used to track surface currents, weather stations and net sensors on commercial fishing vessels, or temperature sensors on lobster traps. Sensors have even been placed on mini-sailboats used for educational programs.

Manning, an oceanographer at the Woods Hole Laboratory of NOAA’s Northeast Fisheries Science Center, is focused on gaining ocean observations that will help him and other oceanographers validate ocean circulation models. For nearly 20 years he has found ways to collect data using low-cost sensors in unusual ways, mixing off the shelf computer technology with recycled household items and common materials from the local hardware store or a backyard to solve a research question.

In the process he has combined his commitment to education by involving students and educators, who often build the devices and help test his latest ideas. They learn about oceanography and earth sciences, boatbuilding and design, map reading and geography, history and international relations, even how to do some basic computer coding. The projects encourage problem solving and teamwork, and show the value of creative thinking.

Offshore fishing boats, research vessels and merchant ships traveling across the Atlantic Ocean have helped launch many of his drifters and miniboats, the latter a collaboration with Educational Passages in Belfast, Maine to provide students with hands-on learning opportunities.

“Life is like a drifter. You never know where it’s going to end up,” Manning said during a recent interview at his office, full of pieces and parts of drifters and computers to help track everything at sea. “In the 1990s I spent 10 years trying to model the ocean, but decided to go back to observations because I liked the field work and the interactions with so many interesting people. It has been a challenge but also a lot of fun.”

One of his latest projects is developing a new version of an ocean drifter with a unique star-shaped drogue hung below the surface to track currents in the deeper layers of the ocean. While the size and shape is consistent with oceanographic standards, it is the more eco-friendly materials that are new.

This new drifter, like earlier versions, is designed to be as eco-friendly as possible. Aluminum and wooden masts have been replaced by bamboo, harvested from a local resident’s yard who wanted it removed to control its spread. Weights from old windows found at a recycling center at the town dump have been replaced by stones gathered from a nearby beach, and the sails once made of vinyl cloth are now made of cotton canvas sold as painter’s drop cloth at local hardware stores.

The most costly part of the drifter is the satellite transmitter on top, about $500, and the cost for satellite time to relay data back to shore. Most drifters send their positions every hour or two to conserve battery power, and last about five months. Solar powered transmitters will replace the current models, extending the life of the drifter and increasing the data it can collect.

The drifters will be deployed in Cape Cod Bay between October and December, with help from local fishermen, to simulate where kemp’s ridley turtles are likely to strand, a common occurrence every fall when bay waters cool and hundreds of the animals become cold-stunned and wash ashore.

At the same time, a new miniboat Manning and colleagues are working on will sail across the bay to provider further information about air and water temperature. With a solar-powered micro-computer on board telemetering data via a satellite, the realtime data from the miniboat along with the current data from the drifters will help direct rescue staff who walk the beaches looking for stranded turtles.

“We are trying to determine if there is a front in the bay, or a place oceanographically where the turtles get stuck,” Manning said of the effort. He even built a wooden model of a turtle, named “Woody,” to simulate a live turtle’s movement in surface waters and to demonstrate the trajectory being potentially different than the various subsurface drifters. The project this fall will be the first real test for many of these prototypes. The students follow their drifters as they move around the bay with the currents via Manning’s drifter web site.

Manning is also testing a “mushroom float” that would replace plastic floats in an effort to reduce marine debris and plastic pollution. He found the material online at Ecovative, a biomaterials company, and ordered the myco foam.  “It looks like sawdust, which you mix with water and put in a container, like a bucket, to grow and form a shape,” Manning said.  “It works well for some applications but doesn’t last long in the ocean. It gets coated with marine life and starts to degrade, but it may last long enough for some of our applications.”

Vitali Sheremet, who works with Manning at the NEFSC, has also been developing ways to incorporate more sensors to add to the bottom-mounted temperature sensors used by commercial fishing vessels participating in the Northeast Cooperative Research Program’s Study Fleet. Previous versions would store data until the fishing net reached the surface and then relay it to the vessel’s wheelhouse computer for the captain to see.

While effective, the sensors were made in England and communication with the firm took time and had to be done via computer or phone. Now,  local engineer Nick Lowell and his firm, Lowell Instruments, is providing a wireless version of the sensor, which will relay information to a small computer costing about $100 that can be mounted next to the vessel’s computer and easily available to the captain, without involving the ship’s computer.

Other data, like pressure, can also be added. Manning hopes to have these new sensors on study fleet vessels in the next few months.  “Fishermen are scientists and they like gadgets, and they are often willing to work with us to improve the data they get above and below the surface.”

The data from this effort and other projects are transmitted back to Manning’s computer and made available to the wider scientific community through various data sharing organizations, including the U.S. Integrated Ocean Observing System network.

Also on the way are upgrades to the shipboard weather stations, which may help the National Weather Service validate and improve marine forecasts and warnings. Two commercial fishing vessels, the 73-foot stern dragger F/V Illusion out of Fairhaven, Mass. and the 60-foot dragger F/V Lisa Ann II from Newburyport, Mass. have been using the stations for more than six months.

A dozen more vessels have requested the weather stations, which are built by a Seattle firm but adapted by Manning and his graduate student interns to make it easier to use on a fishing vessel. Funding for this project has been provided by the National Weather Service.

“Instruments at sea can be expensive and complicated and limit the number of people who can be involved,” Manning said. “There are creative ways to accomplish the science we need while involving fishermen, students and teachers in a fun learning experience. It makes doing research more accessible to the public and gets others thinking about the environment and finding low-cost ways to monitor its changes.”