Students at Marco Antonio Firebaugh High School assembled their miniboat over the 2020-2021 school year, throughout the summer of 2021, and made final arrangements in September of 2021 when they named their vessel the Fledgling Freddy.

Who is FLEDGLING FREDDY?

FLEDGLING FREDDY is a miniboat built by Firebaugh Students (pictured below). It is a sail boat that has a Go Pro, GPS and Temperature sensors. Victor Acuna, the student who assembled the electronics and President of our Mesa Club, is pictured below (right), shown sanding the boat. We will all be able to track the miniboat’s journey through this web page. Freddy will begin sending data and posting it on the web site beginning perhaps,  October 10. We hope it will sail all the way to Kiribati. 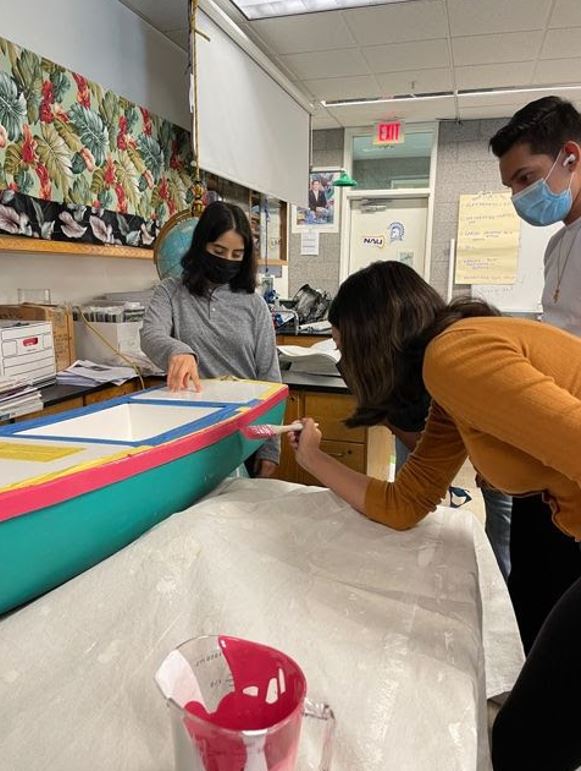 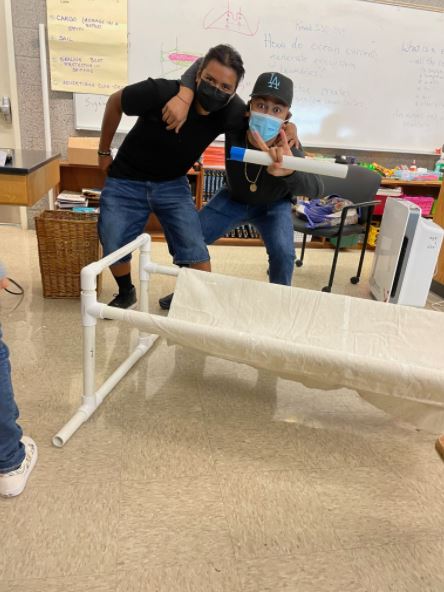 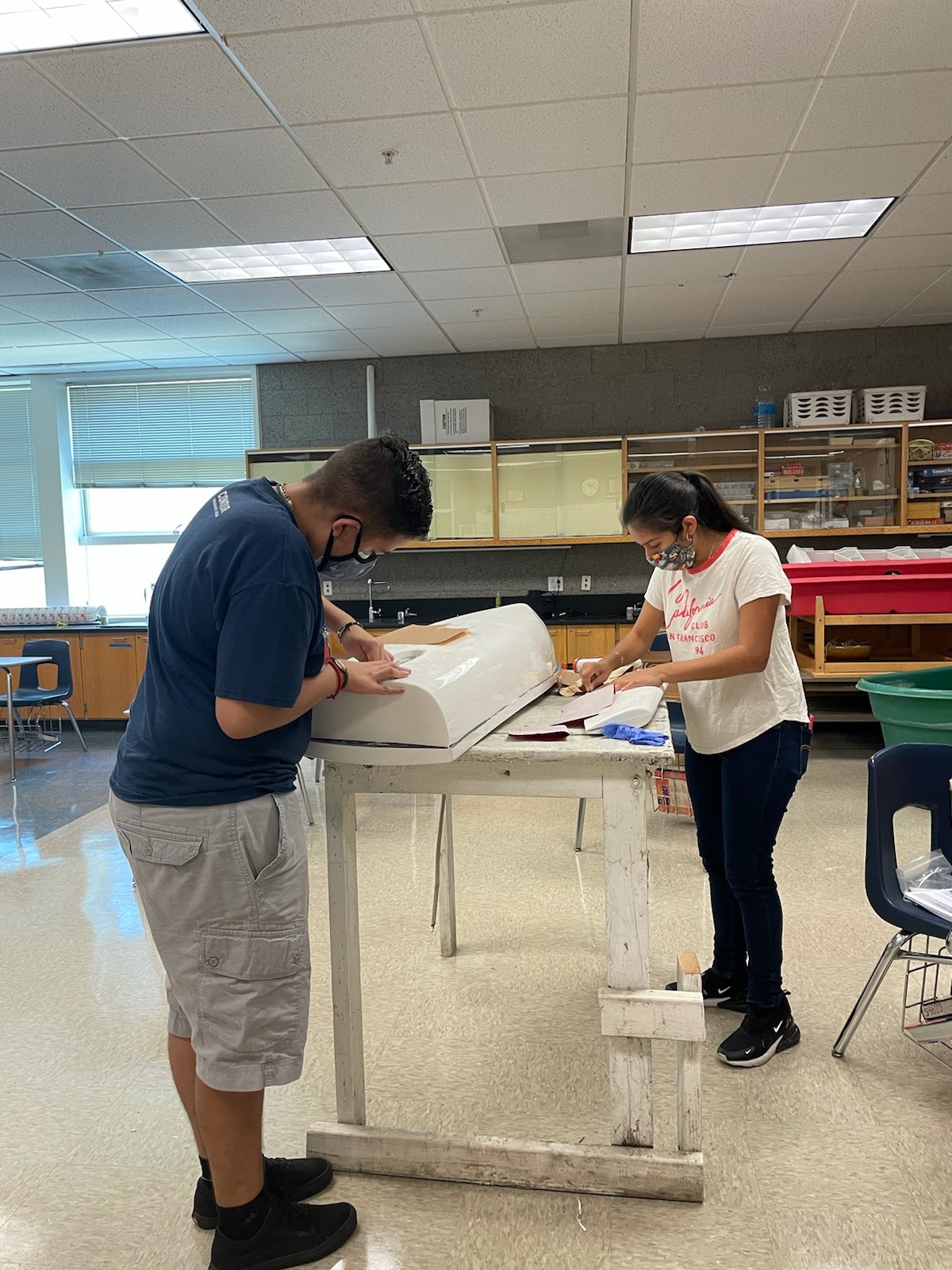 Where will it be launched, and how?

The Fledgling Freddy will be launched on its ocean voyage by the Ocean Exploration Trust (OET) team from the Exploration Vessel (E/V) Nautilus. E/V Nautilus is a 68-meter research vessel equipped for ocean exploration with a hull-mounted multibeam mapping system and deep-diving remotely-operated vehicles. OET works to explore the ocean, seeking out new discoveries across disciplines while pushing the boundaries of education, outreach, and technological innovation. Our expeditions center on scientific exploration of the seafloor, collaborating with the broad research community to identify priority regions and phenomena, and sharing our expeditions with explorers around the world via live telepresence. 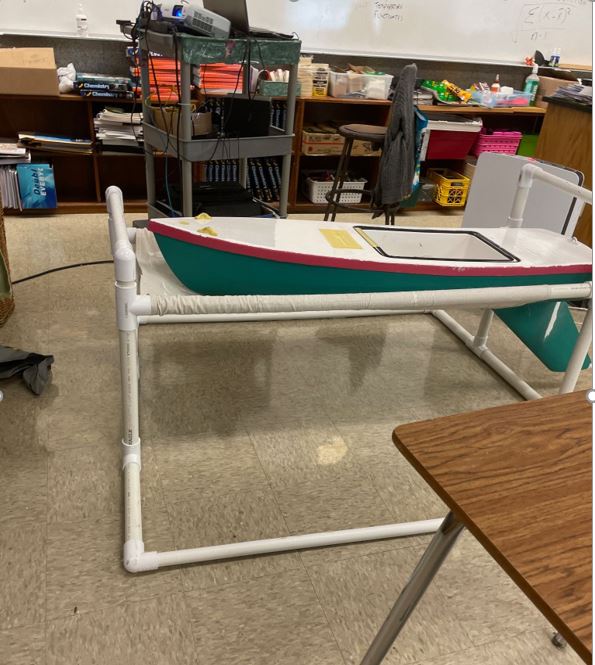 In October, the ship and team will depart San Pedro, California, and transition to a home base in the central Pacific for the next several years, starting with a 17-day mapping expedition. The mapping on this expedition will contribute directly to filling mapping gaps in the U.S. Exclusive Economic Zone (EEZ) southeast of Hawai’i, and also filling gaps in international waters during the mapping transit. The team will launch the Fledgling Freddy miniboat at a student-selected location in international waters along the expedition mapping track en route to the Hawaiian Islands.  Learn more about the Nautilus expedition and team onboard.

OET is proud to help support Educational Passages and this learning experience for students at Marco Antonio Firebaugh High School and others around the world as they follow the Fledgling Freddy on its voyage. Education is a central part of OET’s mission offering educators, students, and the global public remote exploration experiences via live video, audio, and data feeds from the ship streaming 24/7 to NautilusLIve.org, a library of ocean education activities, as well as free schedulable one-on-one ship-to-shore interactions direct from explorers to classrooms and science centers.

When will the boat be ready to sail?

On September 20, 2021, the students held a small Christening Celebration for their boat at the school. The students invited teachers and other school personnel to join them in this event. Here are some of the pictures they captured. 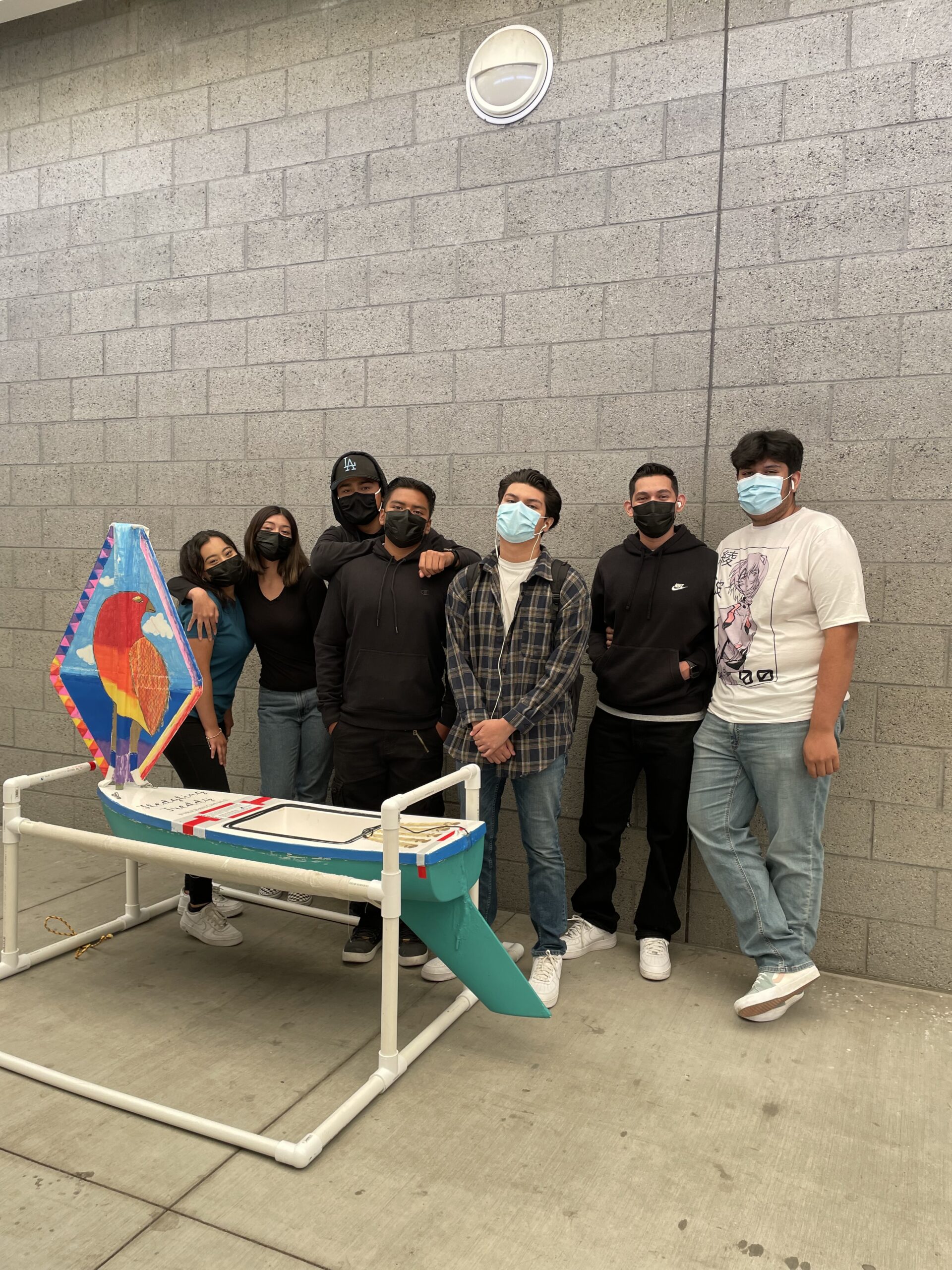 Superintendent Crosthwaite was also in attendance, and later shared the following with the district: “Earlier this week, I had the opportunity to visit students from Firebaugh High School’s Mesa Club who recently built a boat and will set it to sail the Pacific Ocean on a path to Hawaii. I was blown away by the ingenuity of the students, who attached the boat with personal messages, a GoPro, and GPS to track the journey. Our own path forward this school year has been led by great creativity and collaboration, and I’m proud of the success we’ve enjoyed and excited for the achievements that are to come.” 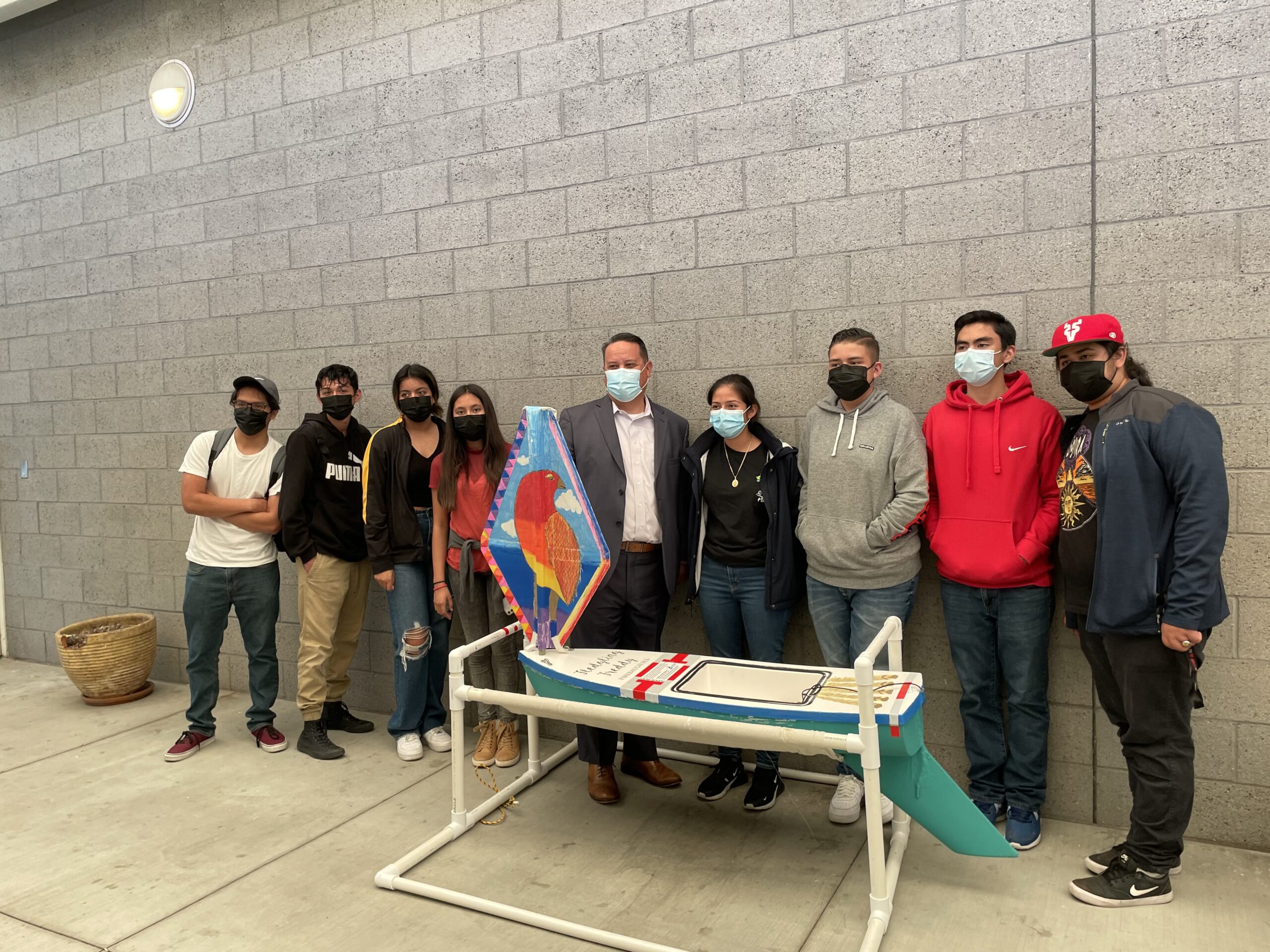 On September 30, Ms. Sciaroni delivered the miniboat to the docks where the E/V Nautilus is! 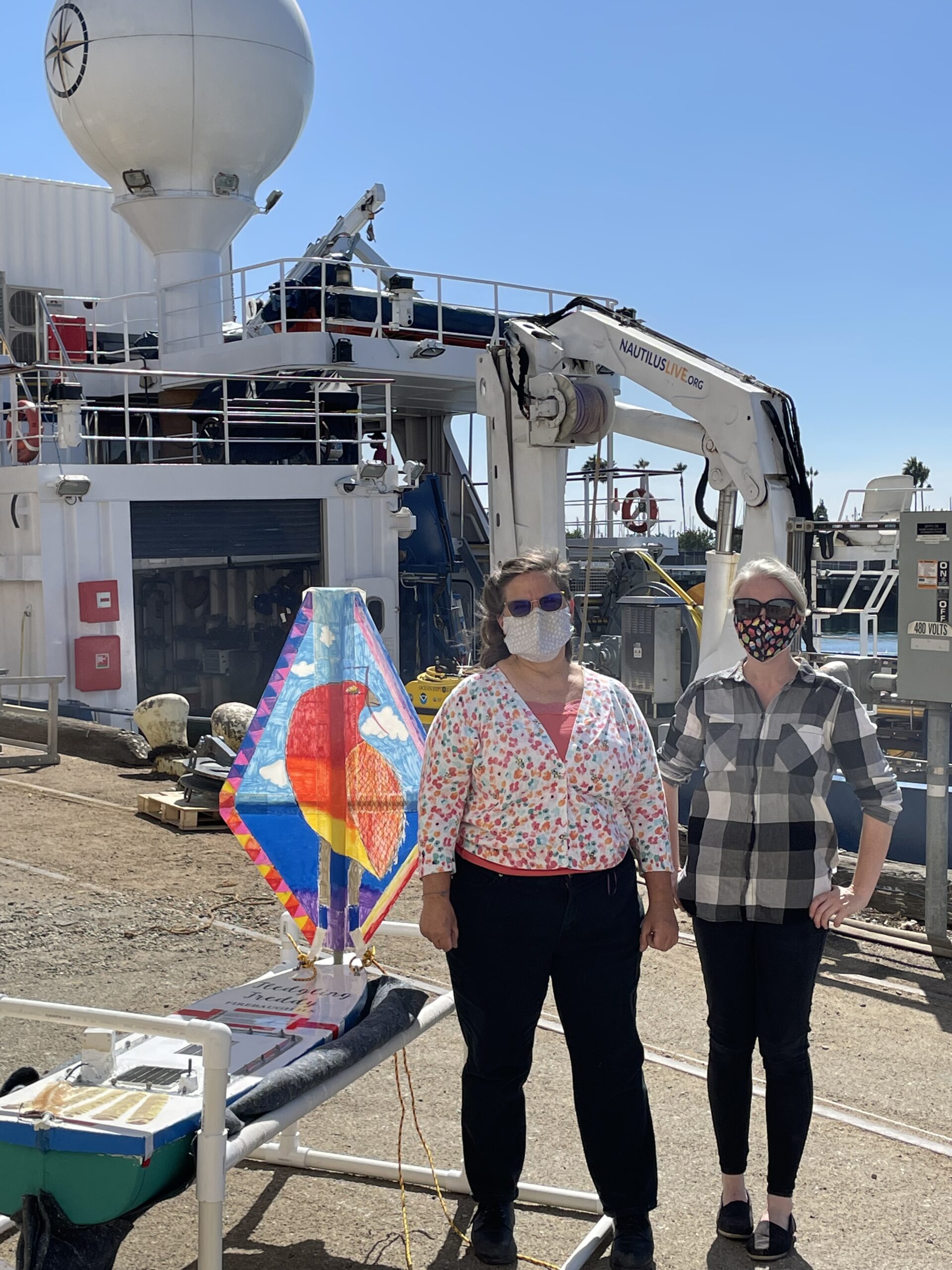 What data will the Fledgling Freddy Miniboat collect?

This miniboat is outfit with a Maker Buoy adapted sensor package. It has air temperature, water temperature, and orientation sensors. It also has a camera on deck! Here are some pictures of the sensors on the boat, and one of Ms. Sciaroni at the docks of the E/V Nautilus (screenshot from https://nautiluslive.org/) making final preparations for the boat on October 5. 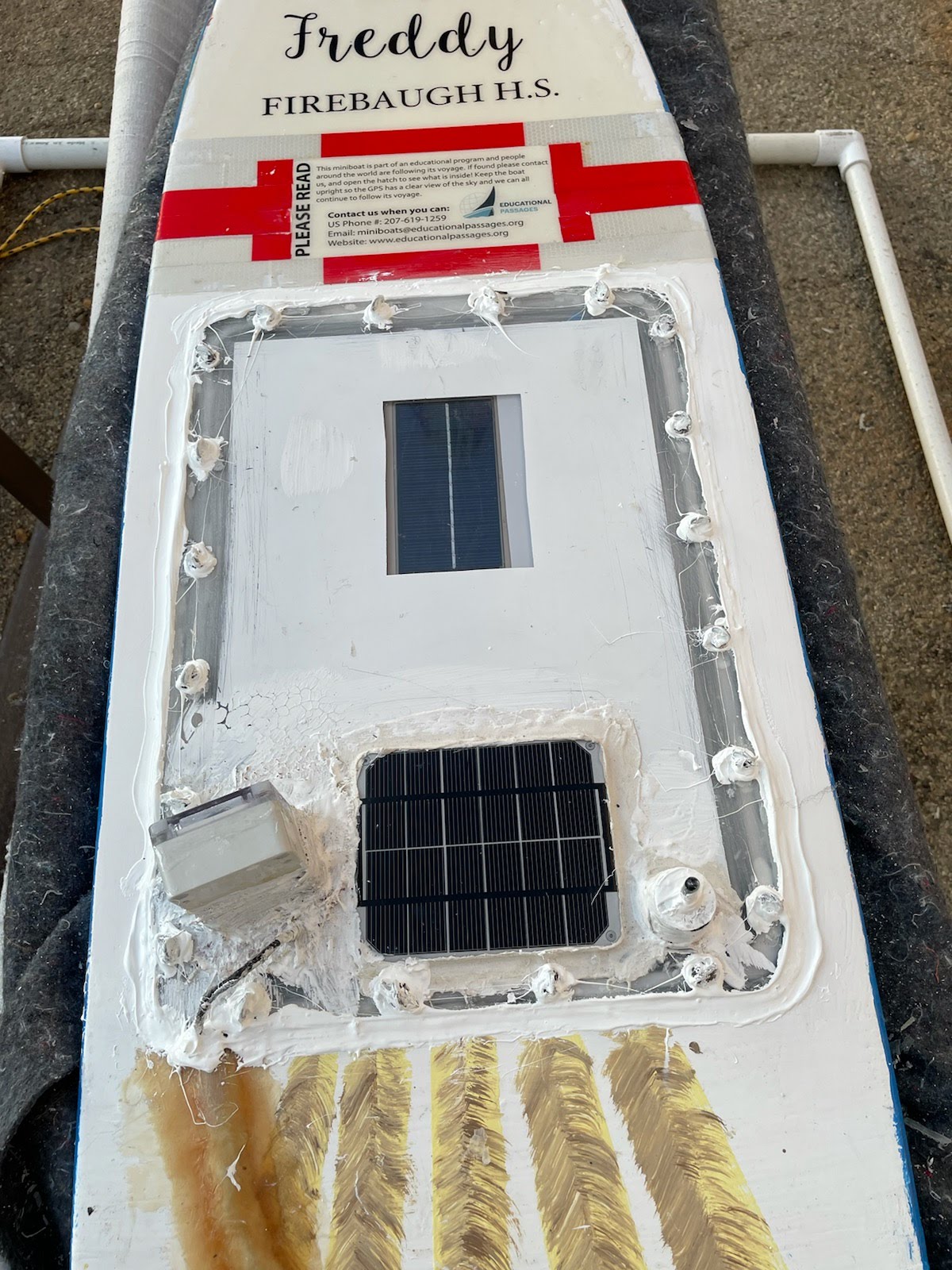 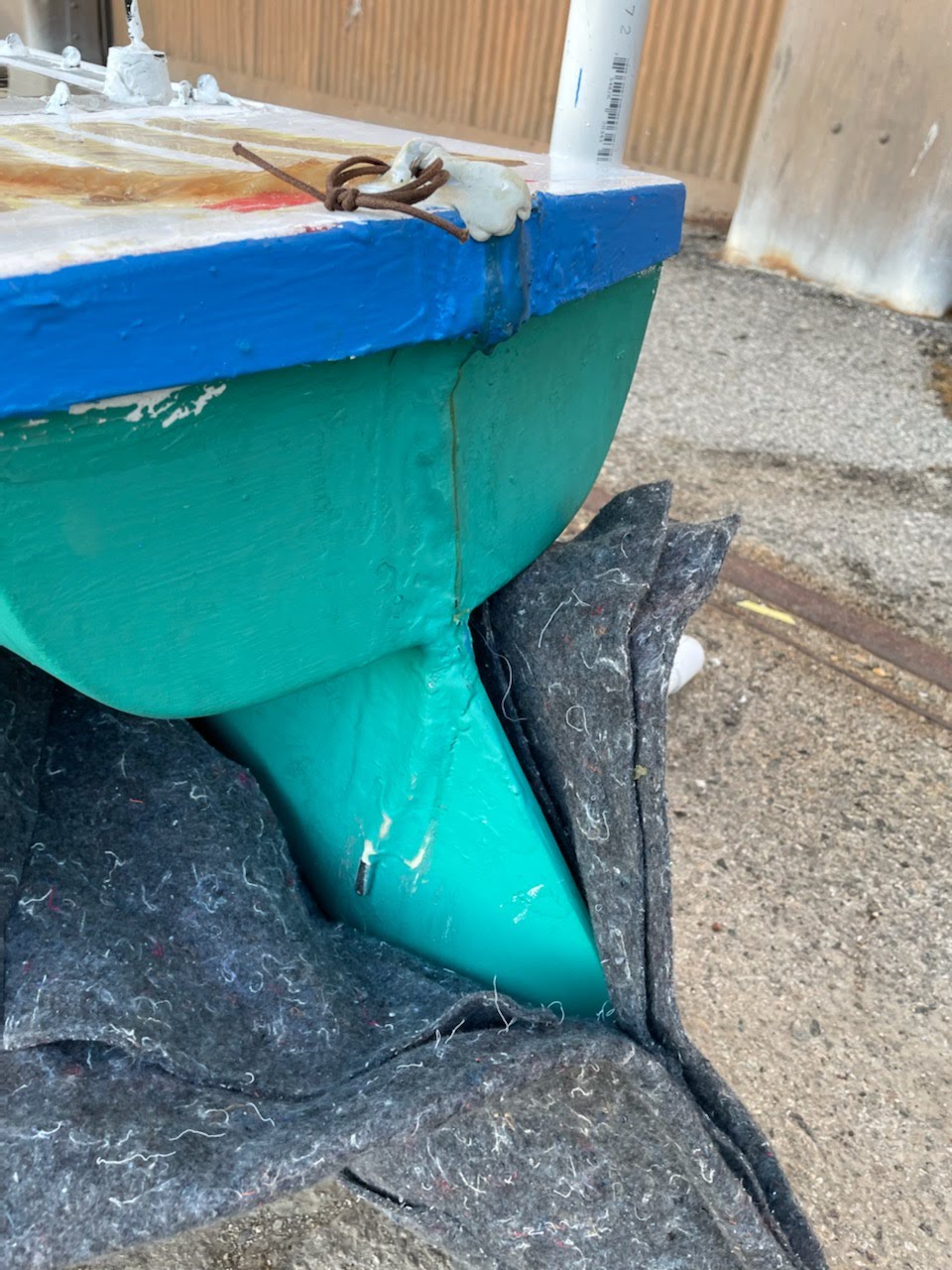 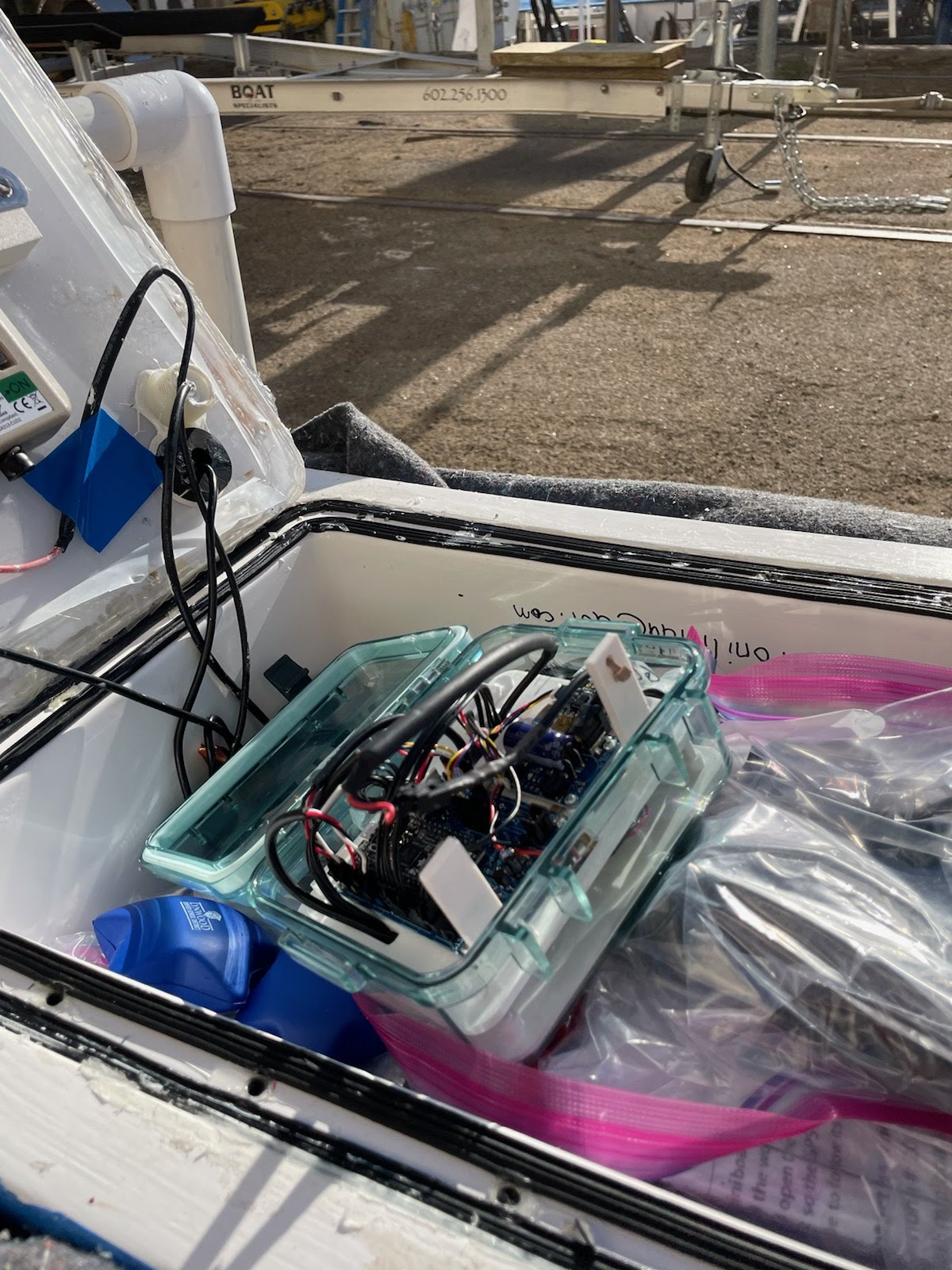 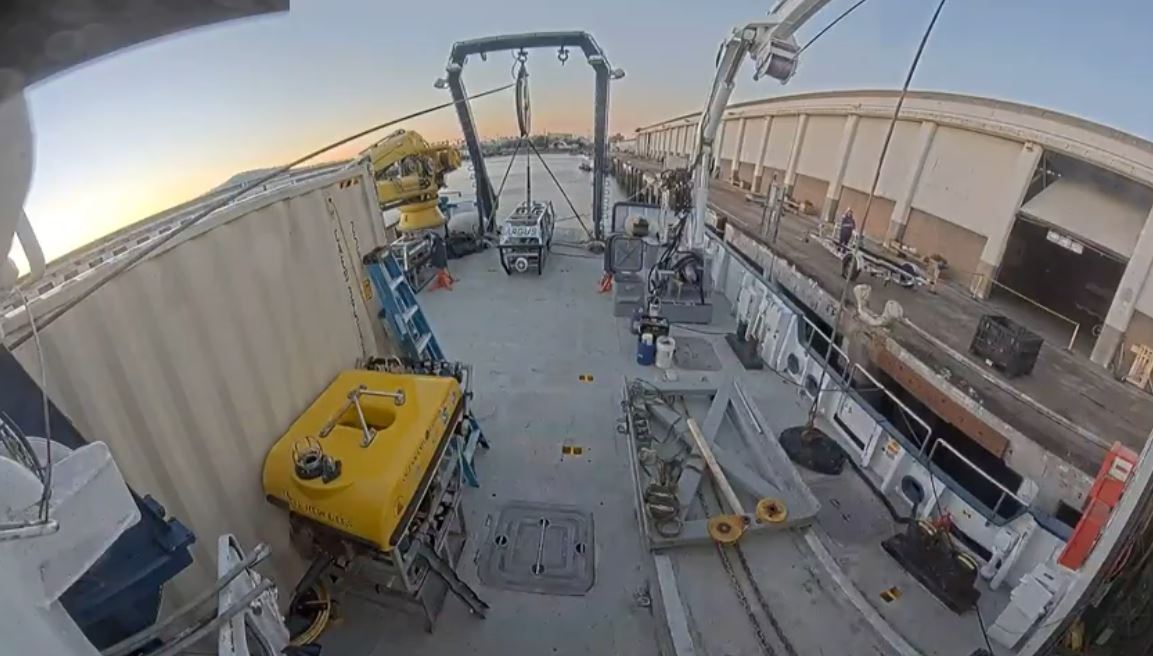 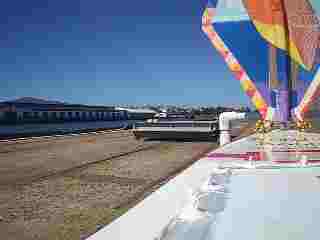 Zoom in to the map below to see the data reporting from the sensor package.

What messages are inside?

Inside the cargo hold will be the GPS tracker, sensor package, and messages and trinkets from the students. The main message inside says:

“I hope you are delighted and surprised to find our mini boat. Please take it to the closest school and ask if there is a teacher who would be willing to adopt Freddy and restore him/her to his/her former glory and functionality. Send us an email and we will work to make sure the teacher has every thing they need to launch Freddy out for another adventure. Freddy has been made with love by students from Marco Antonio Firebaugh High School in Lynwood CA. USA. You make keep the treasures in his/ her Hold and add new things to share with the next class who finds him/her.”

The E/V Nautilus has left port and is in transit NA132 to Hawai’i. They are currently mapping the seafloor with the hull-mounted sonar as they travel, and you can see the Fledling Freddy on the ship’s deck (bottm, left) from Channel 2 as they live stream their expedition. Follow along with us at https://nautiluslive.org/. To read about the expedition and work happening during the transit, read this blog post here: Filling in Bathymetry Gaps from Southern California to Hawai’i.

The students that built FLEDGLING FREDDY got to watch it set to sea during a special interaction with Nautilus Live today at 11:45 Pacific Time. During the meeting, the first report came in with data and picture thanks to Maker Buoy Shop. More pictures and video will be shared here later. Thanks to the Nautilus Live Crew, Ocean Exploration Trust, and all the partners and funders who made today successful, and fun! 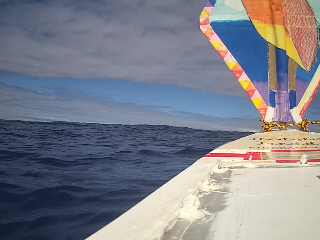 Later that day we took a picture of the boat at sunset on its first night at sea: 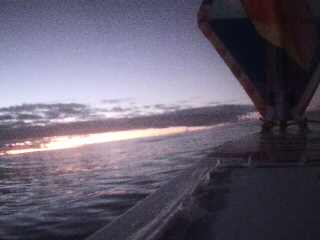 Thanks to some excited donors and support from Maker Buoy, we took a few more images of the boat. You can start to see how it moves in the water, which might spark some curiousity to take a look closer at the orientation sensor data. 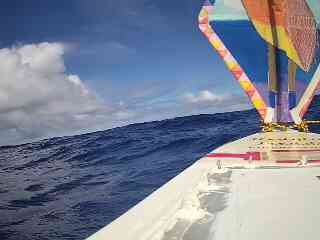 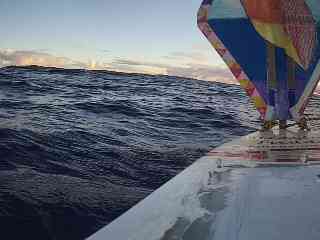 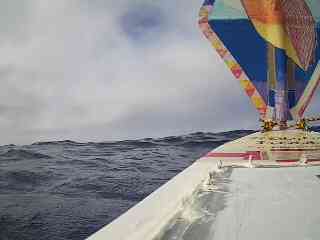 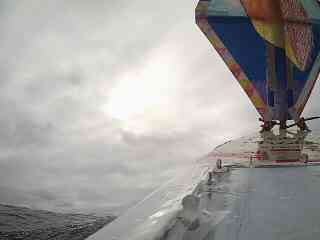 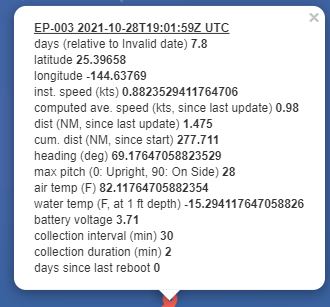 We were monitoring the sensor package system closely on October 28 as the battery levels began dropping quickly. Unfortunately the last message we received was from 19:01 GMT. We are currently analyzing the data to try and decipher what may have happened, and to see if there is any chance it may restart itself and come back online.

It is important to note that the main GPS is still functioning consistently, so we are able to track it. This makes us wonder what is going on inside the cargo hold as both systems are stored inside… what do YOU think is going on? 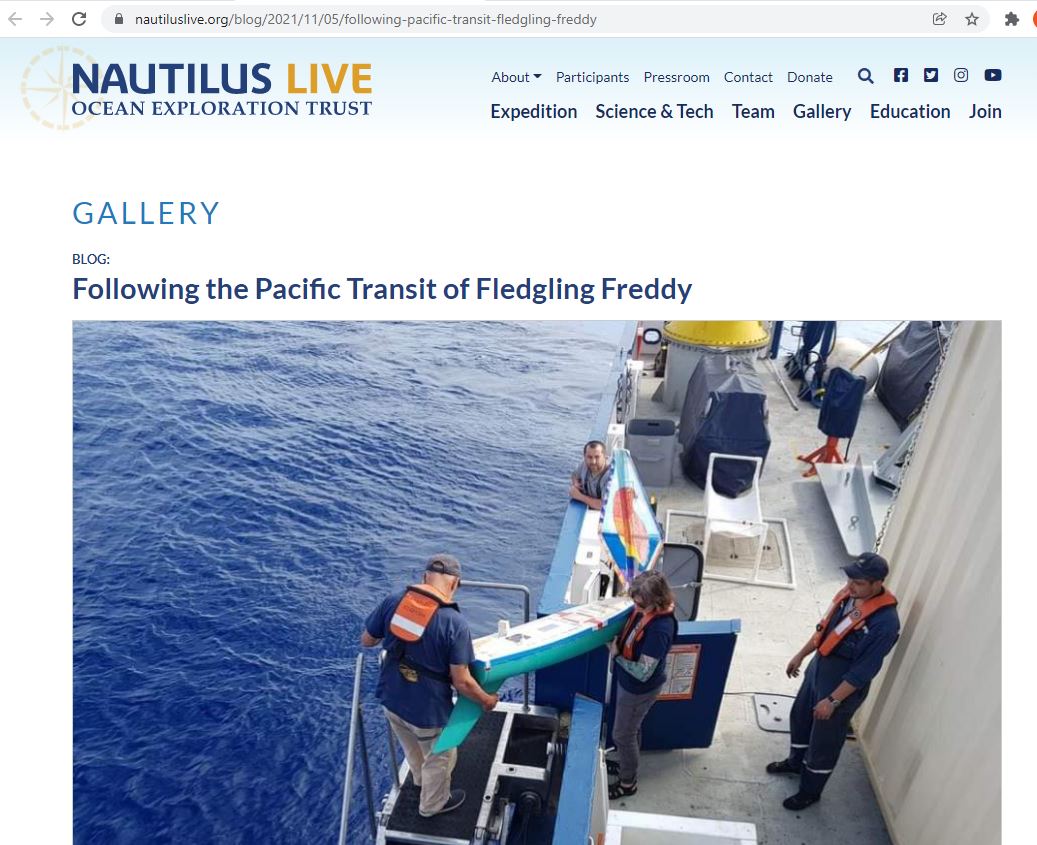 Nautilus Live posted in their BLOG all about the Freddy’s launch! Read here:

Thanks again to the incredible crew of the E/V Nautilus for launching our miniboat adventure, and having us join your expedition this year.

Marco Antonio Firebaugh High is a public high school on the banks of the Los Angeles River. The students involved in this build were from the Environmental Systems and Society Class and the MESA club. Linda G Sciaroni is the teacher. Karen Jobmann is the club sponsor and her student Luna Gonzalez decorated the sails.

The Fledgling Freddy Miniboat Crew would like to extend their gratitude in the following ways:

Thank you to Toshiba America for funding the majority of the cost of this miniboat.

Thank you to Cassie and Educational Passages for providing the kit and mentoring us through the build and deployment + connecting us with Ocean Exploration Trust team and E/V Nautilus.

Thank you Ocean Exploration Trust team for welcoming us for launch on the E/V Nautilus.

Thank you to the Lynwood Partnership Educational Foundation, Dr. Montes,  Mr Ochoa and the Lynwood Unified School district for your ongoing support for the projects of the MESA club and the environmental science students.

Thank You Victor Acuna, president of the MESA club for your expertise in programming and electronics and your successful assembly of the probeware.

Thank you to the IBESS students for your help in constructing the stand and for the painting of the boat.

Thank you to Karen Jobmann for your technical skills in crafting with acrylic.

Thank You Luna Gonzalez for painting our sail and Kendra Dixon for the Lettering, Elliott Dixon for a safe spot to charge the solar.

Thank you to Rich Lentsch for sharing with us ideas about sail design, avoiding the gyres and sailing across the sea, and for sealing the hatch.

Thank you to Jason Jobmann and JEM FX for providing high quality machines to precisely drill the deck holes for the probeware.

Thank you to Patrick Murray for sharing your experience designing boats for the Transpac and for your wisdom about sail design.