The HVES Cruiser miniboat was prepared by these students in Charleston, SC in 2017: This miniboat is currently in Cork, Ireland and being prepared for relaunch! If you know someone who could take it aboard their vessel and launch it into the Atlantic for it to follow the currents back to the US, please contact us.

In 2017 the 1.5m long unmanned miniboat was built and launched into the Atlantic with a GPS tracker as part of the Educational Passages Miniboat Program. After 154 days at sea and traveling over 10,000 km, it landed on a beach in Fahy, Co. Mayo, Ireland and was brought to the Drumgallagh National School in Ballycroy. After connecting classrooms, the boat was brought down to Cork where it was repaired by Walsh Boat Works and is now awaiting relaunch.

HVES in Charleston, South Carolina in 2017: 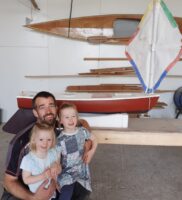