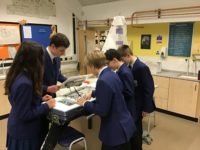 November 22, 2019 The Spirit of Ashley Hall miniboat was transported on November 22 to the island of St Marys to visit the secondary school where she will be assessed, repaired if needed, and hopefully sent back out – but not before the students connect and learn more from each other! A note (with pictures […]

Hatch reveal LIVE across the Atlantic

The miniboat Spirit of Ashley Hall sailed from the US to UK in 118 days with treasures stored inside from the students of Ashley Hall in Charleston, SC, who built the boat. This special “message in a bottle” washed up in the Isles of Scilly in August, and the students from the Five Islands are […]

Landed in the Isles of Scilly, UK

August 20, 2019 The Spirit of Ashley Hall landed in the Isles of Scilly on August 20, 2019. Emails and Facebook messages were sent to try and find someone who could recover her. Bruce Frank posted a picture for us and noted, “White Island this afternoon. Searched where it landed (on the left hand side […] 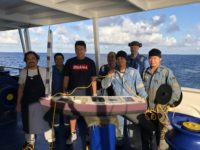 From the crew of the Bermuda Islander: “This morning at 0815 LT (+3 GMT) boat was successfully launched with the distance of 360 nm from Delaware Capes.” Many emails were exchanged with gratitude for everyone’s efforts to get this little boat set to sea, including one from Ms. Holly Blair, the lead teacher for SOAH: […]

Aboard the Bermuda Islander

While the miniboat traveled up the east coast aboard the Showtime, it didn’t even touch the water… but now it is aboard the Bermuda Islander for deployment much further offshore out of New Jersey. Thanks to Andrew Parish, River Pilot, who noted: “We have sent the Ashley Hall aboard the MV BERMUDA ISLANDER, outbound the […]

April 1, 2019 The Spirit of Ashley Hall set to sail? April Fool’s! She is still on land and will be heading to sea after April 13, come back and check then! Pictured on the right is Ms. Blair with her daughters after they made the fun April Fool’s Day video. April 2019 Progress Here […]

Update from Ms. Blair: “This is Trip Brower. He helped us drill the holes in the deck, Hull and stern to run the sensor cables and also lent his expertise in attaching the sensors.  He was invaluable!”

Update from the Video Team

Update from the video team: “This week we are working on creating an iMovie of the boat building process. We are excited to share what we have been doing with you! The keel team is making final preparations to attach the keel. The sail team continues to decorate the sail today. The deck team has […]