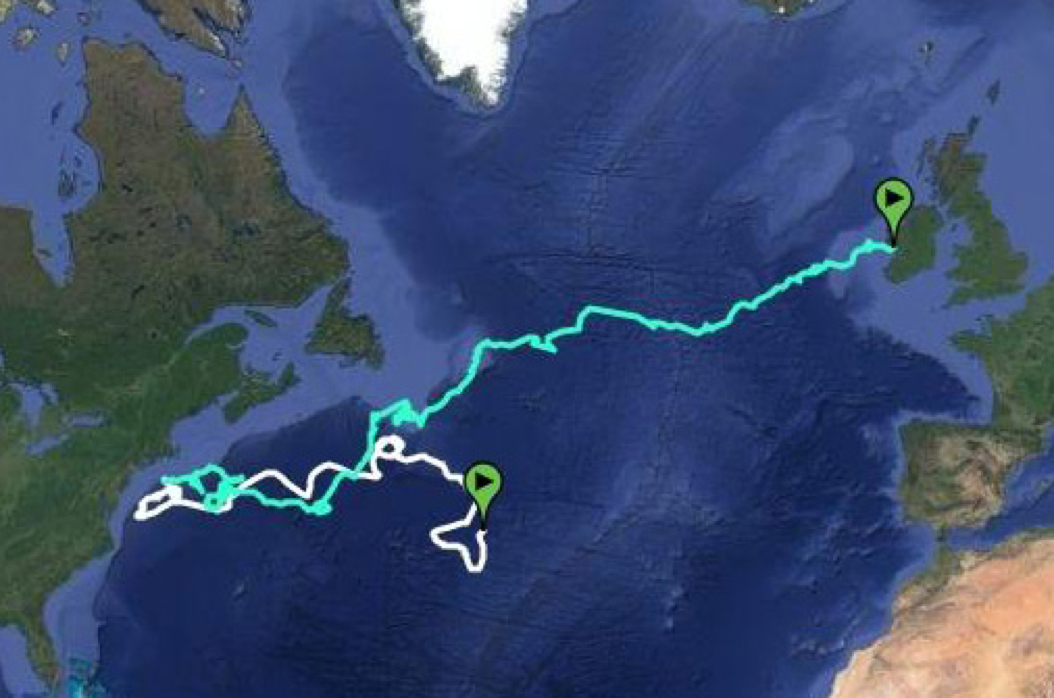 Full story can be found http://www.nefsc.noaa.gov/press_release/pr2016/scispot/ss1616/lancer-and-drifter.html

Student Kaitlyn Dow was excited to assemble and launch a mini-sailboat named “Lancer,” a project for her marine science class with Michael O’Connor at Waterford, CT High School last spring. Fourth grade students in Martha Shoemaker’s class at nearby Quaker Elementary School were just as excited to launch the ocean surface drifter they built as part of a collaborative project with Dow to study how the two objecst would move differently, one by wind and the other by currents.

The miniboat and drifter were delivered to the Woods Hole Oceanographic Institution (WHOI) on April 30, 2016. A week later, on May 7, both were put in the water during one of the first missions of the R/V Neil Armstrong in the Mid-Atlantic Bight, near the edge of the continental shelf south of Martha’s Vineyard.

Students from both schools followed the tracks of the miniboat and drifter over the summer and into the new school year at the NEFSC’s drifter tracks site created and maintained by oceanographer Jim Manning at NOAA’s Northeast Fisheries Science Center.

On September 6, O’Connor and Dow sent an email to the Irish Minister of Education and others to note the approach of “Lancer” and several other miniboats to their shore. They asked that anyone who finds these miniboats recover them before they get damaged in the surf and to take each boat to a nearby school so students there can learn about ocean sciences, navigation and technology, and about the students and schools who built the miniboats from Educational Passages kits. They even emailed the mayor of Waterford, Ireland in an effort to get him interested in the project.

The next morning O’Connor received an email from the Irish Minister of Education’s secretary acknowledging the message, and another email from Coastways Surveys saying they happened to be working on the west coast of Ireland and had their eyes out for the approaching boats. More emails followed asking people to be on the look-out for the boats as word quickly spread in Ireland and among mini-boat followers in other European countries.

On September 17, “Lancer” was found on the beach of Garumna Island at Droim, Leitir Móir in Conamara, County Galway, Ireland. A local 8-year old girl named Méabh (prounced Maeve) Ní Ghionnáin, who had been following “Lancer’s” voyage with her family and at school, found the miniboat near her home and brought it to school.

Plenty of excitement and media attention has followed, including an interview on a national Irish-language radio station. Méabh’s mother, Neasa Ní Chualáin, contacted O’Connor via email with details, including some of the items Méagbh found inside the hull: a stuffed teddy bear, pencils, a T-shirt, UConn memorabilia, and a flash drive full of information and messages from the students.

By coincidence, Dick Baldwin, founder of Educational Passages, was invited to attend the European Marine Science Educators Conference in Belfast Oct. 4-7 and present the miniboat program to educators there. Méabh and her mother traveled to Belfast with “Lancer” to meet Baldwin and attended the convention. Méabh’s teacher contacted O’Connor to say the students at her school were looking forward to connecting online with the Waterford students in the coming weeks.

“It was wonderful to meet Méabh and her parents and to see ‘Lancer’ in Ireland,” said Baldwin, who was originally scheduled to speak for 15 minutes but ended up presenting his miniboat education program, with Méabh and “Lancer” present, to 97 attendees in an hour-long session. Among those at the session were representatives from NOAA’s Office of Education and the Galway Alliance, who are interested in discussing how the miniboat program could be expanded to capture the public’s interest in caring for the ocean.

Plans are developing to repair and update the boat and its GPS equipment and relaunch it with the help of an Irish marine institute. In the meantime, O’Connor and Dow at Waterford High School hope to raise enough funds to travel to Ireland in February with the updated GPS unit and other sensors Jim Manning and colleagues at NEFSC are developing. The funds they raise would also help repair the boat and bring Méabh to Waterford, CT to meet students there, and if enough funds are raised to attend the National Marine Educators Association annual meeting in June in Charleston, South Carolina.

As for the surface drifter made by the Quaker Elementary School students and launched at the same time as “Lancer”, it is still at sea about half-way to Europe.

Dow’s research project was funded by grants from Connecticut Sea Grant and the Captain Planet Foundation.