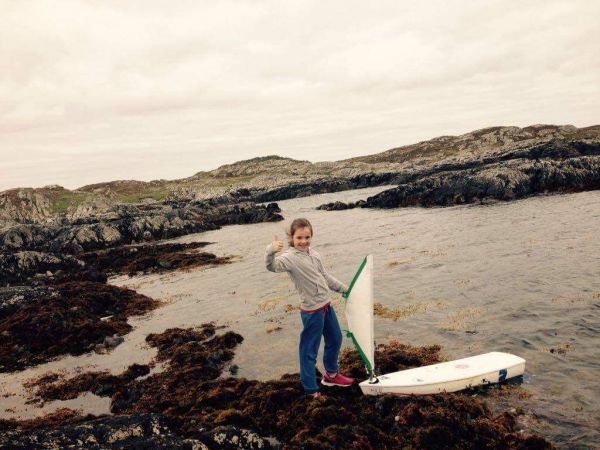 Kaitlyn Dow, A student at Waterford High School, built a 5 foot mini-sailboat (the Lancer) that has successfully crossed the Atlantic.

This boat was prepared by Kaitlyn and other students of Mike O’Connor’s UCONN ECE Marine Science Class at Waterford High School (WHS) in coordination with Mrs. Shoemaker’s 4th grade students at Quaker Hill Elementary School. The project was funded by grants from CT Sea Grant and the Captain Planet Foundation

This was part of Kaitlyn’s year-long research project. As part of the project, she and the 4th graders, built a simple surface drifter that was launched at the same time as her boat. Her goal was to study how the two objects would move differently. The goal was to have the boat ride the wind and the drifter would ride the currents. The boat and drifter were both equipped with GPS transmitters. Kaitlyn worked with the 4th graders and taught them about water movement in the ocean. She even brought them on a Project Oceanology trip to test the drifter and release coconuts with messages inside. Some of these coconuts were later recovered by random beachcombers. One of these beachcombers had released messages in bottles as a child and her mother had written a children’s book about it. She provided Kaitlyn a copy which Kaitlyn read to the 4th graders. Kaitlyn also released 2 GPS equiped bucket drifters that were part of Dr. Whitney’s research on near shore water movement

The boat was filled with gifts from Waterford and UCONN. These included WHS clothing, a UCONN husky stuffed animal, a stuffed octopus and a thumb drive of stories from Mrs. Shoemaker’s students. There were also marine science books and pamphlets from CT Sea Grant.
This is a special boat with three world-class marine science universities, a new research vessel, and a NOAA drifter involved. The boat and drifter were delivered to the RV Neil Armstrong in Woods Hole on 30 April 2016. The Armstrong is UNOLS’s newest research vessel operated by the Woods Hole Oceanographic Institution. The deployments, one of the first missions to be conducted by this multi-million dollar vessel, were made on the afternoon of 7 May 2016, near the shelf edge south of Martha’s Vineyard.

One of the systems that has become integral for ocean research is “telepresence” – where researchers, classrooms and the general public can connect to the ship in real time via the internet. This cruise was a the test run for that telepresence for the Armstrong. The land base of operations for those cruises is URI’s Inner Space Center.
Some of the people involved in setting up this deployment are: