Needle in the Haystack: Miniboat Neptune Arrives in Hawaii

PRESS RELEASE CONTACT: Cassie Stymiest, Educational Passages, 207-619-1259, cassie@educationalpassages.org Needle in the Haystack: Miniboat Neptune Arrives in Hawaii VANCOUVER, WA. Another 5.5 foot long uncrewed student sailboat (miniboat) was recovered on March 23, 2022 after 248 days and 5,347 km of traveling across the Pacific. Its recovery was a surprise to the students involved, not in […]

Miniboat Open House 2020 Join us for a virtual Miniboat Open House to learn more about Educational Passages, hear some of the recent stories of miniboat travels around the world, and talk with us about how you can integrate the program in or out of the classroom this fall. If you are not available at […]

Written by Erin PelletierHolly Blair’s interest in the Educational Passage’s miniboat program started at the 2015 National Marine Educators Association (NMEA) Annual Conference. Her interest became a reality when a week later she found a recovered miniboat (The Upper) at her local Goodwill store and purchased it for $5 US! Over the next summer she […] 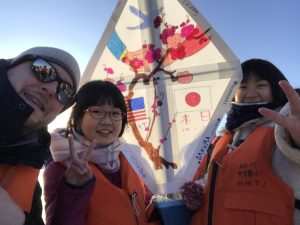 Nate Sandel provided the following the link to the story that aired in Japan and on NHK World International News. https://www3.nhk.or.jp/nhkworld/en/news/videos/20180126122726093/​

Letter from the Director: Greetings! We have been busy here at Educational Passages (EP) and have a lot of news to share with everyone. Over the past year we have deployed over two dozen miniboats all around the world with many more ready to set sail. As the new Executive Director, I am excited to […]

The Teaching With Small Boats Alliance (TWSBA) 2017 conference and 2017 Boat Engineering Challenge exemplified a common theme: students, not boats, should be the focus of maritime and marine programs. At TWSBA, sessions explored youth development, combated systemic biases, and exposed the diverse routes of post-programming opportunities. The conference, hosted at the Chesapeake Bay Maritime Museum […]

Earth Day brought rain to the Town of Fenwick Island, but the weather did not deter the residents.  They spent Saturday removing potential marine debris from their streets and beaches, working as a community to improve ocean sustainability. The Educational Passages team discovered Fenwick on NOAA’s Earth Day marine debris cleanup page which linked to the […]

Bill Nye’s Call to Action After settling into our downtown hotels, the Educational Passages team attended Bill Nye’s keynote speech at the LA Convention Center. In between the humor and science, Bill spoke directly to the educators, asking them to prepare the next generation for massive environmental challenges across the world. He wants Generation S […]