The summer season is upon us, temperatures are on the rise, gardens are growing and beach days are here! It’s been an exciting spring here with some incredible stories of our miniboats and the students that have been building and tracking them. We continue to be amazed at how long these boats sail around the world and how many people are captivated by their voyages.  Speaking of temperatu 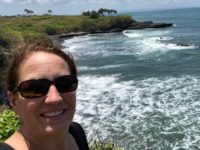 res… we have an incredible event to share with you in this newsletter regarding our latest development at Educational Passages: sensor packages! We will also share with you a new tool that you can use to bring global ocean literacy to your classroom.I hope everyone enjoys the rest of their summer and remember that even though students are out of school we will continue to monitor the miniboats that are currently in the water and are available to work with teachers this summer to help prepare for fall deployments and projects.Be well and Sail On,~Erin

We are now sailing into the technology world with sensor packages that record air and water temperature when installed on the deck of a miniboat! We have been working over the last couple of years with some teachers to test them and they are now successfully sending data through our new Path Analysis Tool. A remarkable event we wanted to share with you all happened on June 28, 2019 at 16:38Z when the Spirit of Ashley Hall from Charleston, SC, and The Perry, from Glendale, CA sent a GPS signal with air and water temperature at the exact same time. What is even more interesting is that these two boats were 11,720 km (6,328 nautical miles) apart and on opposite sides of the world: 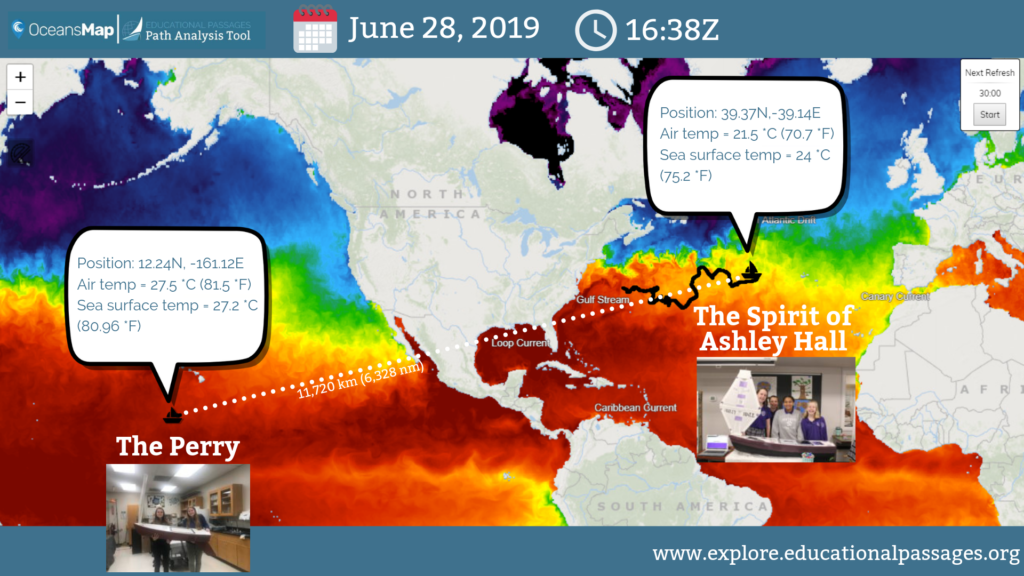 The Spirit of Ashley Hall, from the middle of the Atlantic Ocean, and The Perry, from the Central Pacific Ocean, reported air and sea surface temperatures (see map above) at the same time. They were thousands of miles apart with a small difference in temperature. How could that be? We checked the boats on our new Path Analysis Tool and clicked on “Temperature” which then showed the sea surface temperature with the miniboat tracks… and we could see the power of ocean currents at play. 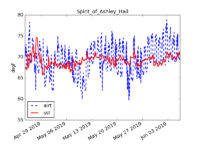 In addition to tracking the Spirit of Ashley Hall’s GPS position, this miniboat has the longest air and sea surface water temperature dataset than any other miniboat. The students were able to see the sensor package first hand and now they can track the temperature as their miniboat reports its position every hour. Holly explains that it feels exhilarating to have the ability to not only share this with her kids but also with the Educational Passages community. She says to see the layers of sea state conditions has to be one of the most amazing experiences she has been able to provide for her students.

This summer Holly and her team will work with EP to continue monitoring the SOAH and work on lesson plans for the upcoming 2019-2020 school year. Holly has many ideas to not only work with her STEAM classes but will introduce the miniboat adventures into her other science classes as well. Holly says she would love to get another miniboat to launch this fall and have her school be engaged in the entire project. Hey, you never know, maybe the SOAH II will find her soulmate ❤.We thank you, Holly Blair, for your dedication to education and our children. You are a true Miniboat Hero!

Have you seen the summer issue of the Journal of Ocean Technology (JOT), Tomorrow’s Ocean Explorers: Learning for Marine Career? We are featured in their TRADE WINDS column – click here to read the article! Thanks to the Fisheries and Marine Institute of Memorial University of Newfoundland for featuring us.

When you subscribe you can also read the essay The Little Boat that Could: Using Unmanned Miniboats to Teach STEM by Tom Sheppard and Dawn Roche, which tells the story of the Raven KASTER.

Thanks to Vivian Chen for sharing with us her drawing which was passed out on June 29, 2019 at the launch day of the Mahi Mahi and Taiwan #1. The caption means “The day we released our miniboats”.

On behalf of Clark Magnet High School and all of us following along, thank you Nautilus Live for letting us join in for launching The Perry!Relaunched: 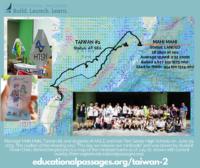 Landed but not recovered:Copper Rose on the Southern Oregon Coast after 4 days at sea (2nd voyage)Mahi Mahi on Nakanoshima in Japan after 18 days at sea (1st voyage)Quiet at sea after amazing journeys: 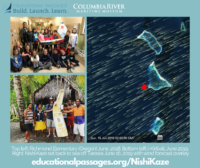 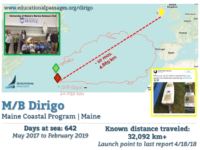 Remember the Dirigo? In the last newsletter we marked her as “no longer reporting” after she sent her last position in April 2018 only 467 km from the point where she started. Well… on February 22, 2019 she washed up on the shores of Ireland! New stats: 642 days at sea (32,092 km with GPS, then over 4,869 km from last report to recovery). 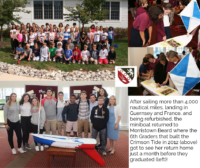 We were thrilled to hear that the Morristown-Beard School seniors who originally built the Crimson Tide (when they were 6th graders in 2012) got to see their miniboat’s full circle journey across the Atlantic just in time before graduating! 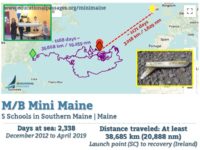 Next week (July 21-25) we will be in Durham, New Hampshire attending the National Marine Educators Association Annual Conference. Hope to see you there!